Skip to main content
The Land of Promises is an invitation to decentre whiteness and the Global North in the visual narrative surrounding transnational and transracial adoption. ⁠

The Land of Promises is an invitation to explore transnational and transracial adoption in China and Belgium, both in the present day and in the past. One can imagine that during China’s one-child policy era Belgium represented “the promised land” for baby girls whose parents had to give them up. And yet, as Youqine Lefèvre’s work unfolds, and she moves from her parents’ archives to her own images, the perspective shifts. When she visits her birth country, China becomes the land of promises—of finding her roots? Her birth family? Herself? ⁠

Such an ambitious promise is easy to break, which explains the palpable melancholy in Youqine Lefèvre’s pictures. Her work also conveys the ambiguity of her position: as an adult adoptee visiting her birth country, she is “an outsider within”, so close to her photographic subjects and yet so far away. From this perspective, art is the new land of promises for Lefèvre, who uses multiple supports (film, paper, etc.) in her photographic practice to create a world where she can live her truths. The work produced by the artist thus generates the artist. Youqine Lefèvre is not only reclaiming her own narrative, but challenging the status of archives that in her hands become both art and a political statement. ⁠

Ultimately, The Land of Promises is an invitation to decentre whiteness and the Global North in the visual narrative surrounding transnational and transracial adoption. ⁠ 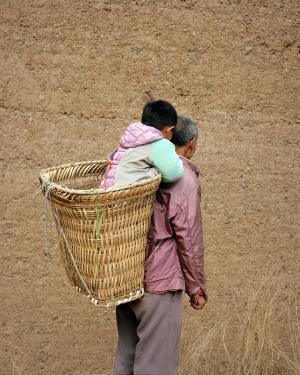