Tarrah Krajnak's work is closely linked to the history of photography on the one hand, and to female and Latin American identity on the other. Following on from her first critical homage to Ansel Adams, she presents a second part devoted to another North American 'master', Edward Weston, whose famous Nudes she reconstructs. She takes the place of models Bertha Wardell and Charis Wilson. While reproducing the poses of the latter, she stages herself as the author of the photographs, remote release in hand. Restoring to the image what Weston left out - or highlighting Weston's choices of framing - of exclusion - Krajnak re-enacts a significant chapter in the history of photography by refocusing it on the role of the female model. Through her performative and photographic act, Krajnak asserts her Latin American identity and her body of colour and establishes through her presence and her gesture of reconstruction of the image a dialogue with her predecessor, Weston, as well as with the contemporary viewer. 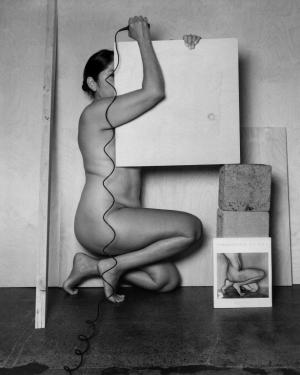