As part of the Curatorial Research Grant - Africa projects from the Rencontres d'Arles and the French Institute, I chose to investigate how Southern and Eastern Africa considers contemporary photography in relation to documentary photography and what this means for African women photographers. Lebogang Tlhako's series Sibadala Sibancane - which means 'we are old, we are young' - paints an intimate portrait of these themes, but it is the creative process that is most striking about her work. All shot on 35mm film, Sibadala Sibancane's photographs evoke Lebogang Tlhako's relationship with her mother and the way in which her mother shaped and influenced her. The series is reminiscent of the time when it was customary for middle-class women to keep a photo album. Tlhako brings this nostalgia to life by creating collages that superimpose images from her mother's archives on landscapes or cut-out portraits of children from her own community.
Fulufhelo Mobadi
Exhibition presented as part of the Africa2020 Season, with the support of its Patrons Committee.

For the second consecutive year, the Rencontres d'Arles is offering a Curatorial Research Grant - Africa projects, in partnership with the French Institute, worth €20,000, open to nationals of an African country, established most of the time on the African continent. The first edition was awarded to Fulufhelo Mobadi for the project She Bad Bad by Lebogang Tlhako. The second edition was awarded to Untitled Duo (Soukaina Aboulaoula & Yvon Langué, Morocco and Cameroon) for the project If A Tree Falls In A Forest. This year, a special mention is also given to Through the Lens Collective (Michelle Harris & Michelle Loukidis, South Africa) for their project Postcard Africa. 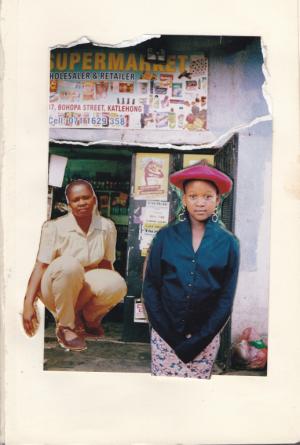