After 30 years of religious and military dictatorship and years of civil war, on 11 April 2019, the Sudanese people brought down Omar al-Bechir, the man who had imposed an undivided rule on them since his coup in 1989. The Sudanese popular uprising began in December 2018. Despite the risk of being arrested and tortured by the regime's political police, for five months the Sudanese took to the streets in their thousands. Driven by the desire to document resistance and repression, a new generation of photographers is emerging. They are between 19 and 30 years old, distribute their images on social networks, and are both actors and observers of this historic moment. The exhibition shows the work of eight photographers from this emerging scene, as well as that of filmmaker Hind Meddeb, who has documented the stages of this fragile transition, alongside a youth ready to defy military and religious forces. Exhibition presented as part of the Africa2020 Season, with the support of its Patrons Committee.
With the support of the French Regional Institute of Sudan and Hahnemühle FineArt.
the opening week. 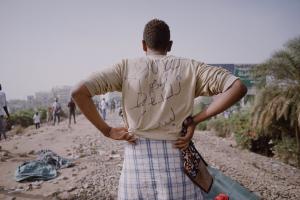