A technical object that has become a cultural icon, the Orient-Express has crystallised a multitude of stories and representations based on real or invented facts. However, before becoming a cultural object, the Orient-Express was first and foremost the train of a railway company: the Compagnie internationale des wagons-lits. Operating between 1883 and 1977 and linking Paris to Constantinople, then Istanbul, it was the first of a series of international luxury trains. Its creation was a diplomatic and economic tour de force at a time when the railway was used as an instrument of political power by empires and states. The photographs presented in the Orient-Express & Co. exhibition are taken from the archives of the former International Sleeping Car Company. Saved by former employees, photographic prints, but also plans, maps, technical drawings and advertising brochures place the Orient-Express in its global historical context. While most of the photographs are anonymous, others are signed by famous studios such as Paul Nadar, Albert Chevojon or Sébah & Joaillier.
With the support of SNCF Gares & Connexions. 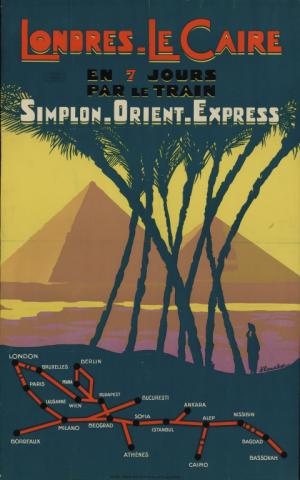