Raymond Cauchetier is best known for his photographs of New Wave icons: Jean Seberg and Jean-Paul Belmondo walking down the Champs-Élysées in Breathless, Jeanne Moreau smiling in Jules et Jim - an image that was to become the poster for the film - and portraits of Anouk Aimée in Lola's clothes... As a set photographer for Godard, Truffaut, Demy, Rozier and Chabrol, Raymond Cauchetier embodies the insolence of the New Wave by reinventing the contours of set photography: he enters the field, has scenes replayed, documents what precedes or accompanies the shot. With him, we enter the shootings: at the side of Godard pushing the trolley where the cameraman is huddled for a subterfuge tracking shot, with the technical crew of Adieu Philippine too, crammed into a 2CV... This exhibition offers a journey through his film images made on the sets of the New Wave films, the most mythical and those yet to be discovered, while Raymond Cauchetier has left us this year. 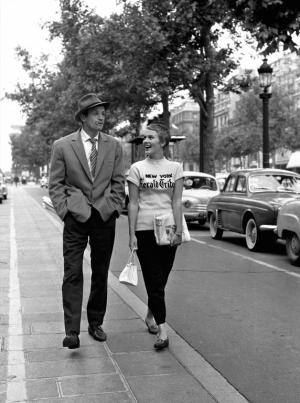